Well, one of my friends told me about ‘ the Satanic artists’ and their devilish attempts to swindle us from the world hereafter and delude us into the ‘present’. I simply said ‘ its lame’ and of course we moved on in our discussion.
But this idea somehow made its way in my subconscious; somewhere it touched the right cords of my conscience. It just popped up in my mind whenever I used to get free, so I decided to verify whether its really lame or not?
I did a little research, went through the basics of the Egyptian one and all seeing eye God ‘Re’ and the pharaohs. We all are familiar with the ‘symbolic’ languages called hieroglyph used by the pharaohs to depict and store their history, which Europeans claimed to conquer and decode through the ‘rosetta stone’. But doesn’t it appear senseless that the only thing they couldn’t decode was the pyramid? Yes it’s senseless because it’s not the truth, not at least what I believe now!
The whole story is very difficult to explain through a small article but the most interesting part is the ‘one eyed God Re’ behind the one-dollar bill. Ho 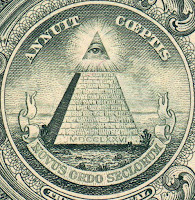 w did the same pharaoh God appear behind the one-dollar bill standing pompously next to the picture of George Washington? Doesn’t this sign directly show the relationship between the pharaohs and the American government? These all questions at least for a second make you quiver because of your own ignorance; ignorance about the signs the ‘Allah almighty’ blessed us with, ignorance about our own existence and ignorance about the individuality that we keep chanting about. Allah gave us signs of the Anti-Christ or Dajjaal and gave us a brain to ponder upon those. But did we use that brain to interpret those signs? No, In fact we channeled our energy to defy those, we saw things but we ignored them because for our existence they all are meaning or material less. In our search of ‘individuality’ we lost our wisdom, our true competence to construe, our capacity to comprehend and all we are left at the end is hunger for material and thirst for more!
We live for the moment; we want things done without even registering the effort, easy life, money and luxury is all what we all craving for. This slackness, which entered our lives centuries ago, is here to stay, here to rot our souls and perish our ability to critique. This slackness didn’t enter our minds miraculously rather it entered through a game played by the masterminds behind that one-dollar bill. Have we ever noticed the taglines of the famous brands we use everyda

y? Let’s look at some of those. “Consider IT Done – Syntel, The power to be your best – Apple Computer, Life’s Good – LG, Just do it- NIKE, it’s the real thing-Coca cola” . These are some of the most famous taglines in the world, but have we ever looked at them closely? They all mislead us to a world which doesn’t exist, they excite us, provoke us to live the moment, remember the present and just do it. But indirectly what they imply is the fact that we abandon the life hereafter for the urge to get the real thing today. We don’t realize this because we’re so dependent on the system that these people run that we have become ‘inert ‘ not capable to interpret anything. I don’t know whether to commend the mastery of the people running this system or to mourn on our own unawareness.
‘Dajjal’ the one who will come and mislead the world with its one eye, will it come or has it already arrived? In Arabic the meaning ‘Dajjal’ is the one who covers the diseased with a sophisticated cover, who presents the rotten as the freshest, in short the one who hides the truth behind its delusions. Now look again at the aim of our lives, at the taglines guiding us to live the moment and just do it. Aren’t we ignoring our eternal life for the sake of today? Can’t we interpret this as the hidden truth or agenda behind the masterminds who have been playing with us for centuries? In fact, they have taken us as puppets, inculcated all the diseases of innate hunger, restlessness, and deceit in our souls and subdued our conscience subliminally.
Now the question is how did we become puppets and how did their network used our subconscious to misguide us. One of their ways is the use of ‘arts and artists’; they used the most precious gift of God to humanity to humiliate the humans. Arts let it be music, dramatics, poetry, stories, illustrations or paintings, it takes humans into a state where it’s just their subconscious which takes over. The creativity is beyond borders of practicality and anyone barely thinks concretely before watching any arts piece. That’s the reason why these people used arts to transform our gullibility into futility. They promoted the message of ‘ keep smiling’ and took us into a world, which excited us. A world, that took us away from our real responsibilities and was full of dreams and aspirations. Once we got into that world, it was very difficult for us to accept the reality and brutality of our real world. So we decided to live in that trance and closed our eyes for the reality. We see the famous celebrities wearing those smiley-faced shirts, living in palaces,

having everything that they desire with no flaws; neither physically nor materially. They deliver the messages of these masterminds; they tell us to just shut up and drive, they take fierce entourages to provoke us and deviate us from the real aim, with their perfect lives they inspire us to be like them and that’s the whole aim. Because once we are like them, they have achieved their goal to make us a part of their system and transformed us into ‘puppets’. We try to copy their style, wear a black skull tattoo, smoke cigarette, think over our sexualities, abuse others, indulge in corruption and in short do what so ever since it’s now or never!
Songs like shut up and drive, whose gonna run this town tonight, good girl gone bad, young forever, life is an open road, womanizer, material girl, infectious, what you see is what you get, naughty girl, buttons, beautiful liar, umbrella, single ladies, erotica, frozen, pussy money weed, I want this forever etc. All just by their names show the trivial delusion created to trap the humanity in their desires. These and many other artists use their deadly looks, gifted voice and ‘the mastermind’s materialistic support’ to misguide us and tear us apart from the truth behind our existence on this earth. These artists intentionally or unintentionally sell out their souls to the masterminds and help them in making us reliant on their system. They have used us and will keep on using us if we don’t wake up for our true individual and collective aim i.e. the life Hereafter!
Next time when you wear a smiley faced shirt or transfer a song to your ipod….think, interpret and understand again!

2 thoughts on “The Satan”