Habib, a blend of; eloquence and charismatic personality, enigmatic voice and expressive eyes or simply an extreme opposite to the illiterate gujjars of Lollywood vying to speak in English……though in his 70’s, he still maintains the charm of a superstar!

The aura he emanates certainly divulges the reason for his eminence in golden era of Lollywood. Equipped with impeccable etiquettes and mannerisms, he negates one’s perception of a typical Lollywood actor of the current ‘gujjar’ culture. He possesses the gift of the gab and makes his way to one’s heart just by a mere discussion. During the rendezvous, he candidly despised the current situation of our country in general and decline of the film industry in particular. He fervently believes in the usage of films as an instrument to stir compassion in audiences for social issues. It is this passion which, despite of severe illness in the past few months, has instigated him yet again to work on a project concerning current societal issues.

Habib, it’s not just a name rather it’s synonymous to a prodigy in the history of Pakistani film industry. Habib entered the industry as a result of a happenstance in 1956. But since then he kept on ascending on his way to success by his sheer perseverance and determination. His debut movie was ‘Lakht-e-Jigar’ with Santosh Kumar and Noor Jehan, in 1956. But his first super hit movie was ‘Zeher-e-Ishq’ with Musarrat Nazeer and this movie bought him under the spotlight of stardom. Soon his pair with Naghma became the hot couple of the industry and he gave many golden jubilee movies with her. He worked in more than 250 movies with exceptional roles, some of these include: ‘Ayaz’, ‘Surraiya’, ‘Kala Pani’, ‘Inqilaab’, Suhaag’ and the list goes on. He won the Nigar award as a best actor for Luqman’s movie ‘Admi’ and Shabab Kiranvi’s ‘Surraiya’. He also won worldwide recognition for his heart rending performance in the historical movie ‘Devdaas’ paired with Shamim Ara and Nayyar Sultana. The legendary Dillip Kumar deeply touched by his performance in ‘Devdaas’ also met him in Lahore to commend his talent.

He also made movies like ‘Baaghi’ and ‘Adabi’ based on current social issues in contract with the government. Despite the disavowal of contracts worth Rs.35 million by the government, he still takes immense interest in working on projects of social awareness. Though his multiple marriages and skirmish with the government has always brought him under a lot of controversies, but he still maintains a lofty stature and reputation amongst his fans. Recently, The Pakistan Arts Council gave him a tribute for his 55 years of innumerable contributions to the film industry. Though his life contains a long list of achievements but it’s worth mentioning that he’ll be receiving the ‘Pride of Performance’ award on 23rd march, 2011.

Habib resides in Lahore with his third wife and children, living a peaceful retired life. He belonged to a lower middle class family from Gujranwala which preferred the education of their children to the luxuries of life. “I belong to a Patiala family and we were a wholesome family of 3 brothers and 3 sisters”. Amusingly Habib was interested in joining the army and his 6’2” tall stature completely suits it too but fate wanted him to be an entertainer, as he explains “Though all of us are well educated but two of my brothers, Hafiz and Riaz Abdur Rehman served the army and they inspired me to join it too, but I couldn’t clear the medical test because of the knee lock”. Eventually he accomplished a double MA degree in English and Persian and struggled to get a good job, “I tried to be excellent in everything from typing to writing, which could help me do a good job for my family”.

A smile of amazement runs through his face when he discusses how he entered the film industry, “It was all by chance!” he says, “I went with my friends to watch a movie and the producer asked me if I’ll be interested in working as an actor”. He discusses the nervous moments of his first shot as excitingly as a debutant “My first scene was with the great Madam Noor Jahan, I was a totally inexperienced debutant and that too I had to beat and take Madam Noor Jahan out of the room in that scene. But it was my confidence that I got praised from everyone for that shot”.

He kept acting a secret from his family while doing his first two movies, as he was waiting to achieve success in this field before disclosing it in front of them. But he wasn’t aware that success was waiting at his doorstep and a legend was in the making. Since then he never looked back and kept on doing movies after movies. But his decisions were always precise “I didn’t do every movie which came my way; I always selected the script on the basis of a strong character and story”. He has won many awards for his flawless performances but his humbleness wins the heart of anyone who meets him. 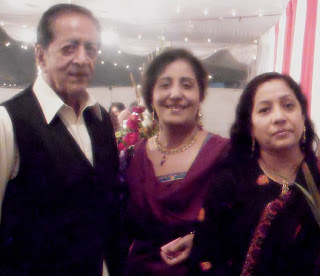 He takes a serious stance when it comes to his personal life. He got married thrice and one his wives includes his famous on screen co-actor Naghma. “We were always together, doing movies, shooting….I didn’t know anyone else but him, eventually we got married” says Naghma. He has three daughters from his first wife the late Hameeda Begum who passed away in 1998, another daughter from his second wife Naghma and two sons and two daughters with his current wife. “Though I spent a few years with my father but he surely passed on his modesty to all his children” says Shahina, daughter of his first wife who lived with her mother most of the time since their parents got divorced in her childhood. His multiple marriages certainly raise questions about his character but he maintains silence in this matter.

Another highlight of his life is his social awareness and the responsibility he assumes towards his country. “I never worked in a movie or a play which contains vulgarity. I always tried to maintain and depict our true values in our movies”. Habib has also made a movie named ‘Adabi’ based on the plight of women in Pakistan. He believes that the core issue of the steep descent of Lollywood is illiteracy and unprofessionalism. He has seen the era of Waheed Murad who worked as his junior artist initially, Muhammad Ali who was a beloved co-star and many other legends. Signs of sorrow emerge as he talks about the current scenario of this industry, “We were a nation which produced 350 films a year…..now we barely produce 15 movies of low quality and content, due to lack of educated people in our industry” he says gravely.

He recently underwent two back to back surgeries, former a grave and crucial brain surgery due to brain hemorrhage and latter to cure his hernia. But now, he seems more than ready and all set to work on a project named ‘Maa’ based on terrorism. He has produced movies before in contract with the sponsorship of the government who never paid the dues “The government promised me 35 million for the copyrights of my movie Baaghi but despite of several claims, they failed to keep their promise”, now MQM is pursuing his case further in the parliament. But this loss hasn’t affected his morale; rather he wants to work for the society. He firmly claims “Through media we can not only influence masses but also we can improve our foreign exchange earnings. Through media we can improve our image internationally and this will encourage foreign investment in our country”.

One can notice the anger and frustration shown by his fidgeting, as he talks about the inhumanity our country is witnessing these days. For him it’s more of a national trauma which is instigated by illiteracy. “Education is the cure indeed! Education creates awareness and nourishes our minds”. As we witness uneducated people swarming our industry today, Habib remembers how at his time everyone was well-educated and respected each other’s privacy, opinions and thoughts.

As per acting, this master remains humble when he points some integral requirements of an actor “Nobody can be the master of an art!” beginning with modesty he resumes, “but all I would say is you have to do roles what you never do in your real life e.g. I acted as a drunkard for my movie Devdaas, but have never tasted wine my whole life, all you have to have is self confidence and belief. Another important factor is rehearsal which improvises one’s small mistakes”.

He is strictly against the collaboration with India in movie production as he completely trusts his local talent. The only message he conveys to the youngsters is “Stay hopeful and be optimistic. Once you are done with your hard work, leave the rest upto Allah and he shall guide you further!”

His firm optimism for the future Lollywood surely lights the lamp of the dying industry. He makes one hope that the dark clouds of ‘gujjar’ tradition will soon vanish and the golden sun will cover it with its warmth!

One thought on “Habib-Ur-Rehman: A Prodigy In The Field Of Acting!”