Have you ever had a friend with whom you can share everything…your cries, convictions, opinions, grief or simply opened your heart out to this friend? Well, if the answer is yes, you’re lucky and if not then you’re wise!
Some might call it harsh luck and others might say it’s a flaw, but I have never had ‘close friends’. Further elaborating ‘close’; it implies friends close enough to share genuine thoughts with without a fear of distrust or betrayal, intimate enough to read your eyes without provoking tears and cherished enough to be missed at every single moment spent without them.
The thought of having a friend with the adjectives aforementioned appears quite vague and unrealistic to me, may be because I have never had an encounter with a friend forever. The idea appears amazing to find someone and make a bond which is beyond your age group, gender, class or ethnicity and give it a minimal name ‘best friend’, but it’s also as improbable for me as astonishing it may appears to others. Friendship has a different measurement scale for everyone, some might term acquaintance as friends or some might take years to consider someone a friend. I may hangout with many and term them as pals, but when it comes to my core persona…no one knows about it. I never share my secrets or my true feelings with 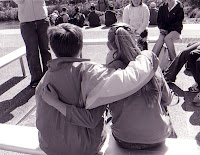 anyone, call me an introvert or a psychic but I just can’t trust or divulge!
I admit that occasionally while sipping my coffee alone or trying to gulp the bland noodles, I do reckon that I have no friends to share my tasteless noodles with. The reason could be my ego, rudeness or something unknown. Oh! Firstly clarifying this doesn’t mean that I have never had friends at all, I have had many and I still have many too but either my friendships break a little too early or they are just fake Hi’s Hello’s as I perceive it. Coming back to the original topic, yes! Neither do I believe in the friends forever jingles nor do I sing them.
A month to a year, that’s the maximum time I maintain my friendships with someone. After that, something out of my control happens which I may term as heavenly and we break it up. This sad ending is never a fight or a quarrel rather it’s an ending of an era with a reversal of time. Reversal of time can be explained as the process in which friends become strangers!
Once the friendship has ended, we might walk by each other but never walk together, we might stand next to each other but never stand by and we might sit next to each other but never rest upon. But the query which bothers me is did we actually stand by each other before this ended? Were those secr

ets which were blurted out after the friendship, ever secure? Were those thoughts made fun of later, ever truly appreciated? And were they actually ill the day when I confronted my weaknesses in front of everyone? These questions might appear vague or improbable but I still suggest why take a risk? Why risk your emotions and convictions to an unknown when you know that the pressure of regret will be intolerable? Why open your heart to someone who can’t save it from the maggots waiting to invade it?
You might be a lucky one to find the pearl in the sea but what if you’re just another average one? Will you risk your emotions when the cost of losing trust and confidence clearly over weighs the benefits of a best friend?
If the answer is still yes, then in your dictionary wisdom is surely over ruled by that tiny bloody piece of flesh called heart!